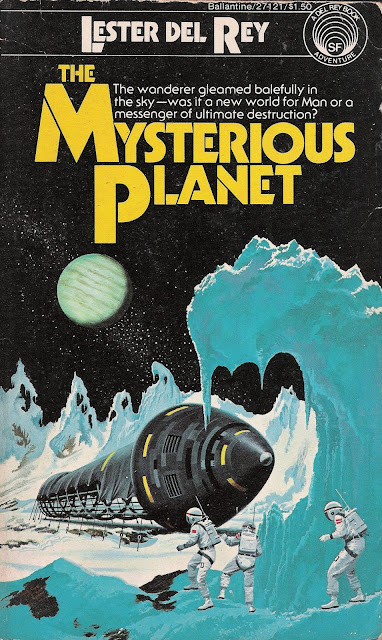 Lester Del Rey The Mysterious Planet (1953)
This is another juvie so I probably shouldn't have sighed quite so hard when the main character turned out to be a plucky teenage lad, all full of spunk 'n' shit, whose dad is some big cheese spaceship captain on Mars. The Mysterious Planet doth tell of how the aforementioned big cheese spaceship captain takes his boy along with him on a mission to investigate the mysterious arrival of a wandering planet in the solar system, because why wouldn't you take your kid along? Our boy forms an uneasy friendship with another lad, one whose big cheese spaceship captain father is considerably richer than everyone else and has thus pulled a few strings to get his slightly thick offspring on board; and some moon or other has been colonised by mostly Hispanic astronauts, so our boy and his wealthy but stupid chum befriend another teenage astronaut.


Bob spent most of the time with Juan Román. The boy seemed to have buried his grief somewhere deep inside himself, and to be resigned to whatever happened. He was strangely serious and naive, with little of the gaiety for which his people were famed.


Should have played him a few bars of La Cucaracha. That would have cheered him up a bit.

Anyway, despite superficial resemblances of plotting to certain details of the Cybermen back story from proper Doctor Who - not least those sleek black ships - the people of the rogue planet, are a lot like us.


Yet Bob was sure now that Thule was more like Earth than its mere outward appearance. There was less difference between the race of Thule and the original inhabitants of Earth than there had been between various Earth cultures in the past.


I think this just means that they aren't Communists or something. Anyway, Thule needs a sun of its own, and Earth's orbit looks mighty fine, and any questions raised by so ludicrous a premise are answered with surprising conviction. They all sort it out in the end, although I don't remember how. Del Rey writes well, clearly and at a reasonable pace, with enough style to allow one to suspend disbelief regarding both wacky science and the cornier elements of the tale; but ultimately there just wasn't 180 pages worth of story here, so it sags in places. Never mind.
Posted by Lawrence Burton at 13:48