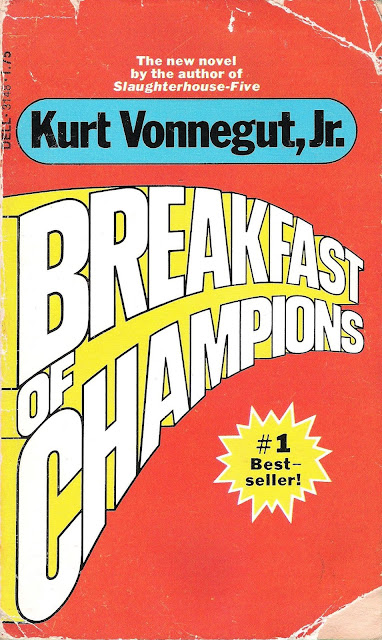 Kurt Vonnegut, Jr. Breakfast of Champions (1973)
Back in my days of being what has come to be described as a Marvel zombie, fiftieth issues of any given comic were usually celebrated with an expanded page count and a load of unexpected monkeying around with established characters - someone back from the dead, someone quits the team to concentrate on his ice hockey, Irony Girl marries the Sarcasmatron, and so on. Here, approaching his fiftieth birthday, Kurt Vonnegut sort of did the same thing, reviving Kilgore Trout, the pulp science-fiction author from Slaughterhouse Five, Eliot Rosewater from God Bless You, Mr. Rosewater, and others, expressly in the name of clearing his head of all the junk, as he puts it.


I am programmed at fifty to perform childishly—to insult the Star Spangled Banner, to scrawl pictures of a Nazi flag and an asshole and a lot of other things with a felt-tipped pen. To give an idea of the maturity of my illustrations for this book, here is my picture of an asshole: 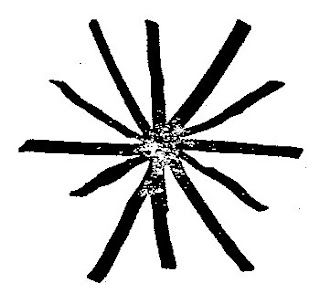 Accordingly the novel is illustrated with felt-tipped pen scribbles, and Vonnegut introduces himself into the narrative, interacting with Trout and the others and explaining why he created them. So it's kind of a mess, but then that's probably what you expect with Vonnegut, and it is at least an educational and entertaining mess offered in summary of how the world actually works:

And when he sketched a plausible molecule, he indicated points where it would go on and on just as I have indicated them—with an abbreviation which means sameness without end.

The proper ending for any story about people it seems to me, since life is now a polymer in which the Earth is wrapped so tightly, should be that same abbreviation, which I now write large because I feel like it, which is this one:

In other words, everything is connected by one means or another, which is why Vonnegut writes how he writes with all of the digressions and synchronicity, making connections and points which might not otherwise be obvious.


I had no respect whatsoever for the creative works of either the painter or the novelist. I thought Karabekian with his meaningless pictures had entered into a conspiracy with millionaires to make poor people feel stupid. I thought Beatrice Keedsler had joined hands with other old-fashioned storytellers to make people believe that life had leading characters, minor characters, significant details, insignificant details, that it had lessons to be learned, tests to be passed, and a beginning, a middle, and an end.

As I approached my fiftieth birthday, I had become more and more enraged and mystified by the idiot decisions made by my countrymen. And then I had come suddenly to pity them, for I understood how innocent and natural it was for them to behave so abominably, and with such abominable results: They were doing their best to live like people invented in story books. This was the reason Americans shot each other so often: It was a convenient literary device for ending short stories and books.

Why were so many Americans treated by their government as though their lives were as disposable as paper facial tissues? Because that was the way authors customarily treated bit-part players in their made-up tales.

Once I understood what was making America such a dangerous, unhappy nation of people who had nothing to do with real life, I resolved to shun storytelling. I would write about life. Every person would be exactly as important as any other. All facts would also be given equal weightiness. Nothing would be left out. Let others bring order to chaos. I would bring chaos to order, instead, which I think I have done.

If all writers would do that, then perhaps citizens not in the literary trades will understand that there is no order in the world around us, that we must adapt ourselves to the requirements of chaos instead.


But is it any good, one might reasonably ask. It's very funny and very readable, but it somehow lacks the craft of Slaughterhouse Five - which is made apparent by how similar the two novels are in certain respects. This one differs with Vonnegut breaking the fourth wall, entering his own novel to spell out why he wrote it. It feels too easy. Back when I was at school, we had an English assignment which meant writing a book over the space of a term, or something which could reasonably be called a book. I waited until the night before we were due to hand something in then cobbled together some twenty or so pages with paper, felt-tipped pens and selotape on the subject of how my book was kind of shit and probably looked as though it had been scrabbled together at last minute; which is kind of what Breakfast of Champions reminds me of. It's good, but it just isn't as satisfying as it should have been.
Posted by Lawrence Burton at 13:46 No comments: 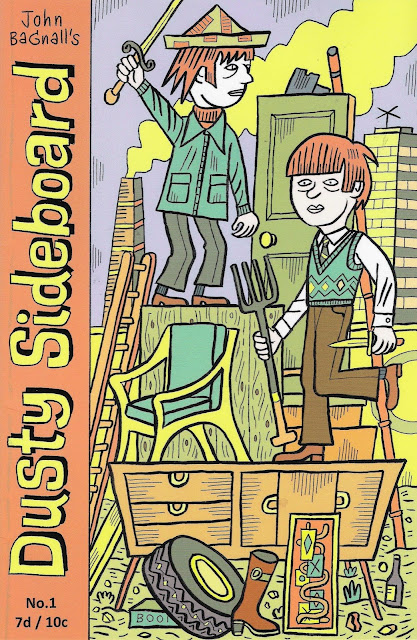 John Bagnall Dusty Sideboard #1 (2017)
I wouldn't ordinarily review a single issue of a comic book, there usually being a limit to what can be said about anything under thirty pages, but sometimes you have to make an exception and this is just such an occasion.

Dusty Sideboard is more of John Bagnall's highly-stylised exploration of something which isn't quite nostalgia, although it comes close. The art is, as always, very much its own language - as arrestingly timeless as any ancient Egyptian or Mexican mural, yet with the kind of warm silence which makes it possibly the closest visual analogy to the poetry of Ivor Cutler that I've seen. Bagnall explores the world of his youth - and my youth for that matter - but this is something quite different to Peter Kay tittering over spangles and Fireball XL5. Dusty Sideboard evokes a world which has almost entirely slipped away by this point, a world of social interaction, physical objects, and very little else because that was enough. It's affectionate - although pleasantly musty is probably the better term given the lack of sentiment, or at least excessive sentiment - and yet eschews the usual rose-tinted focus on collectibles to instead perfectly capture the atmosphere of a lost England, something I'd describe as the language of society as was if I weren't so worried about how pretentious that may sound. Bagnall's observations regarding jokes cracked by milkmen, apprenticeships, and tea dances are spot on and strangely moving, and a style of art one might imagine would be quite limited turns out to be extraordinarily expressive when required - sort of like Dan Clowes but without the cynicism; so no - it isn't quite nostalgia so much as the preservation of something seemingly inconsequential which should be remembered before it's gone entirely. I hope this is the first of many because it's one of the most powerful independent comics I think I've ever seen.

Get your copy here.
Posted by Lawrence Burton at 12:07 No comments: