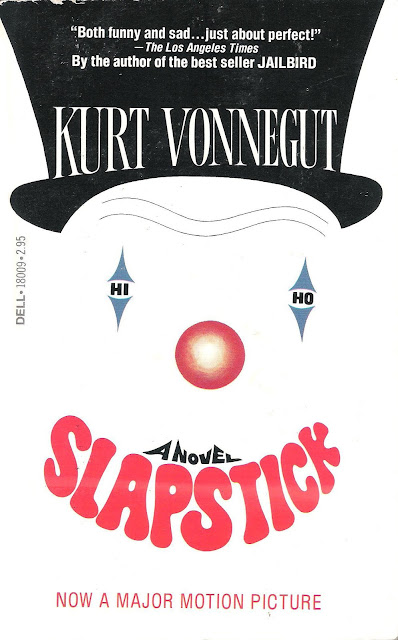 Kurt Vonnegut, Jr. Slapstick (1976)
I reached saturation point with Vonnegut a few books ago, and with three or four still to be read due to my having stumbled across cheap copies back before he'd begun to get on my tits. Happily, my disillusionment turns out to have been a mirage formed by the chance reading of a couple of his more disappointing works in a row; which I realise now because, against expectation, Slapstick is fucking great and has reminded me of everything I liked about the guy in the first place. Naturally it does all the things you would expect of a Vonnegut novel, but does them at least as well as did Slaughterhouse Five, making it easier to forgive Galápagos and others which seemed to get lost in their own labyrinthine jokes to no immediately obvious end.

Slapstick keeps it simple, at least telling its story in a straight line, despite the narrative voice being that of the president of the United States inhabiting some sort of post-catastrophe world with a substantially reduced population, and specifically inhabiting the Empire State building. He's also two metres tall with Neanderthal features, six fingers to a hand, four nipples, and is brother to an identical female twin with whom he once shared a telepathic partnership. They were assumed to be retarded at birth and thus left to their own devices in an abandoned family mansion. Tended only by servants who dressed and fed them, the twins effectively raised themselves. Our man learned to read and was fluent in five or six languages by the age of four, whilst his illiterate sister was gifted with imagination and the ability to wring rich philosophical sense from their shared thoughts, and in doing so to solve all of the problems of the world; and sensing they would be regarded as freakish, the siblings kept their intelligence to themselves, putting on a drooling and gibbering act for the benefit of staff, and during rare, vaguely dutiful visits from parents.

I couldn't actually tell what any of it was about, at least not beyond it being a satire upon the usual institutions and conventions found in Vonnegut's line of fire; but the author introduces the book like so:


This is the closest I will ever come to writing an autobiography. I have called it Slapstick because it is grotesque, situational poetry—like the slapstick film comedies, especially those of Laurel and Hardy, of long ago.

It is about what life feels like to me.


Which is probably as much as you need to know for any of it to work; and work it does, regardless of how lurid the caricature becomes, maintaining the well-intentioned but ultimately doomed dignity of Stan and Ollie right up to the last page.
Posted by Lawrence Burton at 12:01