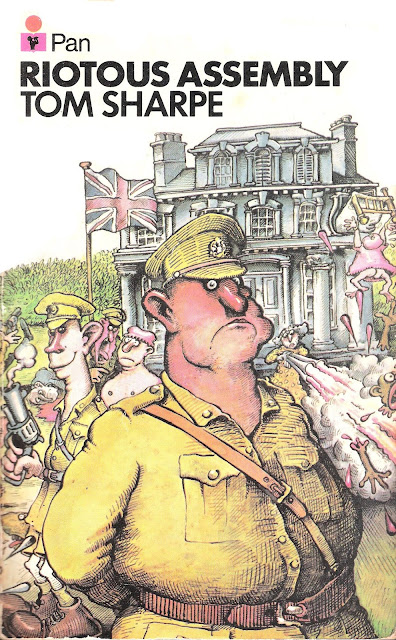 Tom Sharpe Riotous Assembly (1971)
More steps retraced, and this time to a book originally borrowed from the same kid who lent me John Keel's Strange Creatures from Time and Space. I can't have been much older than thirteen, and he insisted I read the thing because it was funny; so Riotous Assembly being neither a Doctor Who tie-in, nor anything I'd been obliged to read by my English teachers at school - not that they made much effort in that direction - it might be argued that this was the first proper book I ever read, at least in terms of fiction and things with literary aspirations.

Amazingly, it's as funny as I remember it being, although I'm reading it with very different eyes this time around. The era of its origin is now a foreign land, as is particularly clear from the other titles you might enjoy described in the last couple of pages:


His Lordship was what the girls in a posh boarding school called William their handsome tennis coach. They laid traps for him. They teased him. They were very fond of him. Very fond. That is why William is in a prison cell when the story opens...


His Lordship by Leslie Thomas is about a girls' school that makes St. Trinians sound like a nunnery, according to some guy from The Listener, which means they probably suck his dick and rub their tits in his face and all that. Cor!!!

Then there's Paul Sample's wonderful cover art featuring, I could hardly fail to notice, black African tribesmen depicted as cartoonists tended to depict black African tribesmen in the seventies, and for a moment I had a horrible feeling I might be about to re-engage with something which would turn out to be a bit more Jim Davidson than I like these days, what with it being set during South Africa's Apartheid regime and all.

Thankfully my fears were unfounded.

The incredible thing about this novel - and a debut novel no less - is that it amounts to juggling a series of near impossible contradictions equivalent to a situation comedy set in a Nazi concentration camp. It's a satire of Apartheid at the expense of those who benefitted from the regime, and yet it's told from their point of view. There's very little to like about Kommandant van Heerden and his officers, and in many ways they are monstrous without quite being written as such, meaning neither their unpleasant views nor terrible deeds get in the way of the story; and yet the story is a vast, absurdist Heironymous Bosch spectacular with no punches pulled when it comes to murder, disembowelment, hangings, and white cops indescriminately treating black people as animals. In fact, being told from the viewpoint of Kommandant van Heerden and his officers we too experience his victims as faintly comic innocents routinely mown down whilst fleeing from a government sanctioned psychopath with an elephant gun.

It's not that the novel is without sympathetic characters so much as that they appear only as furniture, something for Konstabel Els to shoot. Yet this is nothing like a defence of Apartheid, the racism of the South African state, nor even anything so repulsive as more innocent times when you were allowed to tell jokes about shooting black people because it was all in fun. There are no Ben Elton style slogans or statements of the obvious because once you've read the thing, it really doesn't need spelling out.

The book closes with an historical re-enactment of the history of South Africa performed by the inmates of a lunatic asylum.


'You would think they'd get tired of lying down and getting up and lying down again,' the Mayor said when the Zulus had gone through their death agonies for the umpteenth time. 'Must keep them physically fit, I suppose.'

'So long as the bastards don't win, I'm happy,' said the Kommandant.

'I think they do have a moment of triumph in the finale,' said Dr. Herzog. 'It's the battle of Isandhlwana. The British ran out of ammunition and were massacred.'

'Do you mean to tell me,' said the Kommandant, 'that you have allowed white men to be defeated by blacks? It's insane. What's more it's illegal. You are encouraging racial hatred.'


It's a funny book, but the humour is about as dark as it gets, even though it may take the reader a while to notice this, filtered as it is through the blandly utilitarian perspective of its monsters. This is an incredible novel, all things considered.
Posted by Lawrence Burton at 09:45