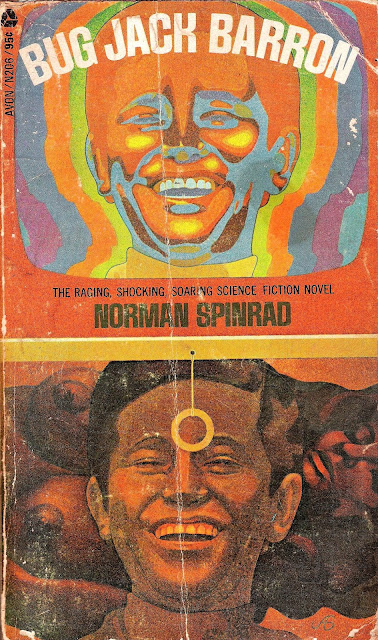 Norman Spinrad Bug Jack Barron (1969)
I vaguely recall having been put off Spinrad by one of his short stories in an old New Worlds collection, and put off mainly by prose quite clearly written by a man wearing sunglasses and a beret, smoking one of those LSD cigarettes and listening to jazz - I say man but I really mean some cat; and yet it is this same be bop mangling of language which makes Bug Jack Barron such a great book. Bug Jack Barron is a TV show in which viewers are invited to call in on their futuristic vidphones and bug the host - Jack Barron - about whatever political issue of the day might be bothering them. Barron then vidphones the person or politician responsible live on air and gives them a hard time, and the viewing figures for the show are such that only an idiot would pretend to be otherwise engaged when Barron calls. The book moves slowly in terms of events, taking its time to pick over numerous moral quandaries and to establish an entirely plausible future more or less resembling the present but for a few minor details; yet it doesn't feel at all slow, its first person testimony tearing along with the breakneck pace of a Stan Brakhage film somehow comprising a stream of consciousness rendered as highly caffeinated hipster jargon - James Joyce and William Burroughs collaborating on an episode of Mad Men with a whole load of Lenny Bruce and Marshall McLuhan thrown in for flavour.


It can be disorientating but it's really worth hanging on in view of where the story takes us.

I noticed a few Biblical parallels - Jack's symbolic crucifixion and himself and Sara as Adam and Eve tempted by the serpentine Benedict Howards. Actually, they're hard to miss.


'Think about what that means every morning when you wake up, knowing it's all there forever—the way food tastes, the way a woman's body feels, the smell of the air—all of it yours, and all of it forever. Wouldn't you sell your soul for that? Wouldn't anyone? Because you wouldn't need a soul to go somewhere and play a harp when you croak. You'd have it all, right here on terra firma. Forever.... Forever....'

'You sound like you're about to breathe fire and brimstone and ask me to sign a contract in blood,' Barron remarked dryly.


Bug Jack Barron is one of those striking a deal with the devil tales, so I'm sure such imagery is intentional, and the context is capitalist society, specifically the media-driven American version with the significant and still very much relevant problem of morality being defined by the highest bidder. As is probably obvious from the above quote, millionaire industrialist Benedict Howards develops a process which facilitates immortality and is busily buying up senators and congressmen whilst killing at least one president who refuses to play ball. Contrast is provided with snapshots of black America, those getting shat upon at the bottom of the heap for whom Jack Barron has become a televisual campaigner, injustice being his bread and butter in terms of ratings. Howards' brand of immortality comes with a terrible price - as the cliché has it - at which point the novel veers off in the general direction of stomach churning body horror, or at least enough so as to make its point quite clear.

I dislike body horror, generally speaking, having thus far failed to find myself in any way excited by the thought of someone having a penis sewn onto their face - that being the level of thematic thrust the genre so often seems to employ in lieu of actually bothering to tell a fucking story. If anyone feels that such a view represents some kind of censorship or perhaps a violation of their human rights, screw you and grow the fuck up. Winky face. Winky face.

Anyway, Bug Jack Barron does its job extremely well without quite sticking fingers down the readers throat, which is nice; and given the present state of politics and society as it is here in America, this book is at least as relevant as it ever was, arguably more so, and not even the author snapping his fingers with an mmm mmm yeah every few paragraphs quite manages to date it. In fact, when Spinrad names Reagan as having been president - as he does at several intervals - it blends so seamlessly with the landscape that I had to remind myself of this having been written in the sixties.

Possibly the only detail which Spinrad seems to have passed over is the role of the media which here appears less insidious than has been the case in recent years; although passages such as the following suggest this is more to do with the novel focussing on the wider society than any oversight on the author's part:


He put a razor in the last word, signalled to Vince to give him three-quarters screen and zingo, Howards was a scared little twerp cowering below him in the hotseat. He suddenly realised that to the hundred million people on the other side of the screen, what they saw there was reality, reality that was realer than real because a whole country was sharing the direct sensory experience; it was history taking place right before their eyes, albeit non-event history that existed only on the screen. A strange chill went through him as for the first time he got a full gut-reality flash of the unprecedented power wielded by his image on the screen.


Grazing the internet, I find that this seems to be one of those novels which divides people in so much as that some have apparently hated it, even described it as unreadable and slow. As is probably obvious, I belong in the other camp. I suppose my only criticism would be that I've personally never seen the appeal of immortality, but then that isn't really what the book is about, so it's not a problem.
Posted by Lawrence Burton at 07:45