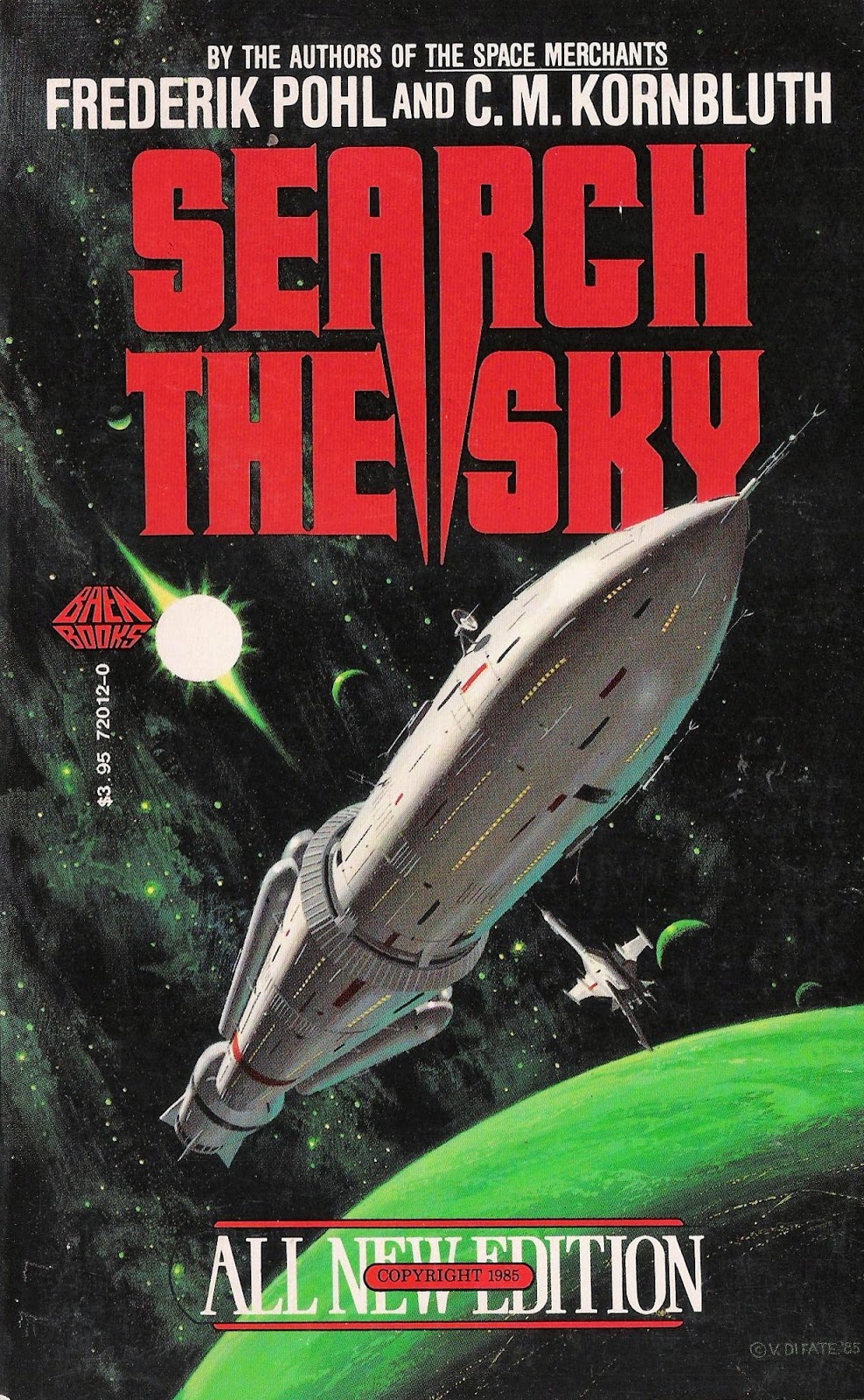 Frederik Pohl & C.M. Kornbluth Search the Sky (1954, revised 1985)
Kingsley Amis has impressed upon me the wisdom of picking up anything I see by Pohl and Kornbluth, and although I was sort of looking for The Space Merchants, obviously I wasn't going to just walk past this one.

Search the Sky isn't either quite so bonkers or so convincing as Wolfbane but is mostly of the same generally high standard and takes a similarly Swiftian angle. Humanity has spread itself across the universe, with contact between increasingly isolated colonies rendered impractical by sheer distance. A ship arrives from one of the nearest colonies - as is anticipated every few hundreds of years - but the distant descendants of the original crew - the people on board the ship back when it first began its journey - seem idiotic. Ross, a young trader, wonders if this degenerative state has befallen the other outposts of humanity, just as it seems to have befallen both the visitors and the stagnating culture of his own world; and so he is let in on an extremely well-kept secret, namely that there is one ship which can travel faster than light, and thus is he charged with answering his own question.

Ross visits a succession of human colonies, each more ridiculous than the next, each sunk into ruin by failing political systems. Here the scope for parody is considerable, and the authors have a lot of fun with it, not least with the gerontocracy in which only the most aged are presumed to possess wisdom sufficient for leadership.

There was sickening fright on Helena's face. 'Didn't you hear? We have to vote for the best man. Oldest is Bestest, you know. That's what Democracy means, the freedom of choice. They read us the ages, and we choose which is oldest. Now please, Ross, hurry before somebody starts asking questions!'


Each failing society is characterised by the infantilisation and repression of the majority by a minority elite, although some examples make for better metaphors than others. Whilst the society encountered immediately following the gerontocracy makes its points through the agency of a matriarchal dictatorship, the lightness of tone steers it a little too close to The Worm That Turned from The Two Ronnies.

Finally we end up back on Earth to find a technologically advanced human civilisation apparently comprised of dunderheads, Laurel & Hardy fall guys, the inhabitants of a thousand sight gags ending with some guy left holding a tin tub up against the ceiling with a broom handle. These are more or less the people encountered in Kornbluth's The Marching Morons, so it's fairly entertaining. I must admit to a certain degree of unease when dealing with anything suggesting that an excess of stupidity is to the ultimate detriment of the human race - despite what I myself may or may not have implied about the devotees of certain television shows during the course of previous reviews. It's a sentiment which can sometimes appear to steer a little too close to eugenics for my liking - see also shitty neofolk acts bemoaning the fall of European culture without actually naming any names just in case anyone gets the right idea. Thankfully here the fall from grace is deduced as having arisen from the state of isolation experienced by the dividing branches of humanity, so scapegoats are mercifully absent.

Search the Sky is no Wolfbane, as I say, and the point of the narrative is sometimes defeated by its own meandering tone if you really want to be picky; but it's otherwise a decent read, and it's funny in all the right places.
Posted by Lawrence Burton at 07:17