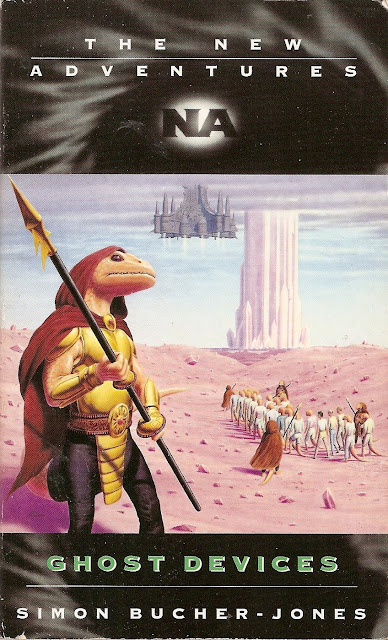 Simon Bucher-Jones Ghost Devices (1997)
It's been some time since I read Ghost Devices, but it left an impression of being something which would reward the occasional return visit, and happily this has very much turned out to be the case. This particular re-read may have been brought to you through subconscious anticipation of The Brakespeare Voyage by Simon Bucher-Jones and Jonathan Dennis, soon to be published and over which I've been salivating at least since I first read the proposal as it briefly appeared online back in 2006 or thereabouts; the first sitting, way back whenever, was as I recall inspired by The Brakespeare Voyage - or Nebaioth as it was then known - seemingly vanishing into limbo when Mad Norwegian Press dropping the Faction Paradox imprint. I'd never really warmed to Virgin's Bernice Summerfield, a wisecracking archaeologist sprung from their New Adventures line of Doctor Who novels, but Nebaioth wasn't happening, so Ghost Devices was probably picked up as the literary equivalent of a consolation shag, if you'll pardon the simile.

Bernice Summerfield always struck me as a supermarket's own brand Douglas Adams knock off - twee references to bonking, recycled Black Adder gags, and the mistaken assumption that any surreal juxtaposition of concepts is inherently hilarious when described in the language of a politely bewildered 1930s clergyman. Excuse me, old bean - I couldn't help but notice that you appear to have landed your interstellar battlecruiser on top of Mrs. Bixby's tombola...

Of course, established characters are only ever as interesting as their authors are able to write them, and Simon Bucher-Jones is exceptional in this respect, in that he could turn out an Insane Clown Posse tie-in novel and still leave readers struggling to recall the last time they read anything so thoroughly convincing; and he kicks off in particularly fine form here with a passage that I would suggest rates easily amongst the all-time great opening lines, as striking as anything Lovecraft ever said about how it's good to have a small brain because that way it's much harder to think about space monsters:


In the evenings when the star Sadr was the colour of burnt umber, the Factories crawled down the continental shelf to drink. Hoses with diameters measurable in kilometres rose and fell into fluorescent waters. Bodies of water the volume of the Great Lakes were sieved for deutronium and rare earths.

Drones hissed steam from their fierce metallic grilles and banged a few detaching metal plates back on to the decrepit moorings of their various home Factories, but the servicing was increasingly slipshod and careless.

Around the shoreline, a semicircle of towering machinery grumbled in hushed voices. The younger Factories hooted to each other mainly in brief ultrasonic bursts - high frequency stutterings of supply and demand, the interchange of mission statements and the gossip of office machinery.


Furthermore, the novel maintains the same standard in the pages that follow - breathtaking, surreal, poetic, and genuinely comic in all the right places. There's an element of Douglas Adams, mind-bending scientific whimsy mixed with moments of utter absurdity, but the blend is smoother, less laboured, and is built on firmer narrative ground. Massive ideas come thick and fast, all knitted seamlessly into the story without a hint of showboating or the suggestion of plastered over cracks. It takes real art to combine such elements as these, skipping from genuine tension to the truly ludicrous without missing a beat or conspicuously swapping hats. In this respect, I particularly enjoyed the Ninjucoids, once deadly robotic assassins whose errant programming has left a yawning gap between the perception of their own aspirationally violent deeds and what actually happens:


'Excellent.' The Ninjucoid reabsorbed its flaying knives and its acid-sprayers. It was quite surprised that the human was still alive, let alone giggling like that. The base-line data stored in its systems on humanoid vulnerability to painful stimuli were clearly out of whack. Still, it could rely on its instructions: find the Vo'lach traders responsible for the sale of the useless weapons and make an example of them. A big radioactive spreading example.

Sanok Vawn watched it go, its sinister walking gait spoilt by the still visible juggling dumbbells that were flowing back into its skin. He took a deep breath, and tried to stop his hyperventilation.

When the rebels broke down the door of the storeroom an hour later after their unopposed attack on the Citadel, and found him with perfect nails, surrounded by exquisite and dainty salad, even the hardest-hearted of the revolutionaries realised that he had suffered enough.


Ghost Devices is at least equal to anything I've read by better publicised names like Alastair Reynolds, Charles Stross, Ian M. Banks, and Stephen Baxter whilst inhabiting similar territory. The nosebleed physics and grand scale of adventure are all there and entirely convincing, with the only obvious differences being sales figures and a more developed sense of humour.

I was not particularly well-read when I first picked up Ghost Devices, but I've made serious efforts since, and this still stands out as a landmark novel for me; at least as one of very few titles that made me want to write my own science-fiction. Never mind more widely read, this guy should be winning Hugo awards.
Posted by Lawrence Burton at 13:37