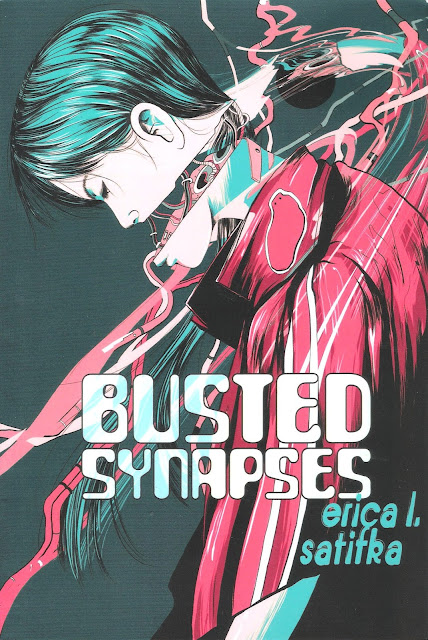 Erica L. Satifka Busted Synapses (2020)
I don't really keep any sort of finger on the pulse of contemporary science-fiction and don't have much of an idea of whether it genuinely exists or what it is - and obviously I'm talking about the written word here, having significantly less interest in the more corporate forms. This means that, from where I'm standing, Erica L. Satifka is either one of the best authors we have right now, or I simply haven't noticed the good stuff because the shelves at Barnes & Noble seem to be chock full of things which would really, really like to be on telly when they grow up. Stay Crazy was great, if you remember that one, and Busted Synapses may be better, or is at least as good.

Certain parts of the publicityplex have been mumbling about cyberpunk, which sort of works, but nevertheless feels to me like an appeal to persons who wear aviator goggles at fan events. True enough, here we have the notion of many tentacled corporations as inherently evil combined with something resembling virtual reality, neither of which were invented by William Gibson, and frankly this is a damn sight better than most of his body of work with the possible exception of Pattern Recognition. Busted Synapses isn't an adventure, isn't the cool new flavour, shifts no paradigm, and inhabits the regular unskilled existence of people I immediately recognise from the real world; which is nice because I'd argue that we don't need either Star Captains or plucky day-saving teenagers in 2020. Busted Synapses grabs that familiar, thoroughly depressing reality outside the window by the sack and gives it a goodly twist, just like proper science-fiction should. The call centers, screen addiction, and human populace reduced to economic resource will be known to most of us. The rest is extrapolated from where we are right now, but not by a whole lot, and not enough to leave us cosily reflecting on how at least things aren't yet this bad because they sort of are but for the small print.

There's a chance Erica L. Satifka may eventually tire of comparisons with Philip K. Dick, because she's certainly no copyist and comparisons made with himself usually refer to something blandly cinematic from an adaptation rather than his actual novels; but Busted Synapses is inhabited by those same doomed outsiders we met on Mars fiddling about with their Perky Pat layouts in Palmer Eldritch - or possibly their relatives - and the company is just as faceless, just as lacking in basic humanity as in both Dick's oeuvre and Trump's America. Additionally, Satifka's focus is sharp and without distracting diversions down mystical or otherwise psychological side roads. My only complaint is that this focus means for a short, snappy novel where I could have stood to spend more time reading, although I suppose that's barely even a complaint.

Publishers need to start throwing money at Erica Satifka because on the strength of what I've read, what the world needs right now is more of her work, or work of equivalent quality. Popular and intelligent don't have to be mutually exclusive, and this sort of thing - which aims resolutely higher than the usual bingeworthy consumer product - makes the world a better place.

Posted by Lawrence Burton at 10:15